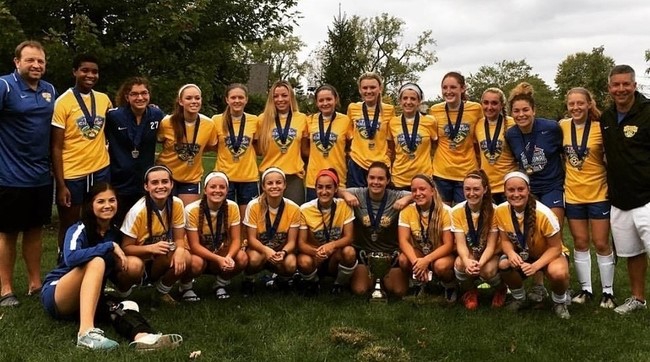 With he Fall season coming to a close, Team Chicago can look back on a very successful MRL & State Cup season for the 1998 through 2002 Elite teams.

1998 Elite head coached by Dave Lovercheck finished its MRL season with a 7-1-1 record and 26 goals for and 10 against in the Premier I division and at least a runners-up finish. FCKC has one final game to play and if they lose that game we will win the division and automatically qualify for Regionals in Sioux Falls, SD next June. Even if we finish 2nd we can still qualify for Regionals if FCKC wins the Kansas State Cup championship in the Spring. The IYSA State Cup for this age group will also be played in the Spring and gives the 1998 Elite another avenue to clinch a spot at Regionals.

1999 Elite head coached by Dave Lovercheck won the IYSA State Cup with a convincing 4-1 victory over Eclipse ECNL and qualified for Regionals in Sioux Falls, SD next June. The MRL Premier II division title was clinched with a game in hand after a 1-0 win yesterday against MI Jaguars took 1999 Elite to a 7-0-1 record thus far and 18 goals for and 5 against. With the title the team has also secured promotion to the Fall 2017 MRL Premier I division.

2000 Elite head coached by Phil Nielsen won the MRL Premier II division title in equally impressive fashion with a 7-1-1 record and 18 goals for and 8 against. The season ended on Saturday night with an impressive come-from-2 goals down-win against Waukesha. In State Cup 2000 Elite fell agonizingly short to the eventual State Cup champions Campton.

2001 Elite head coached by Phil Nielsen was an unfortunate victim of the change to birth-year registration and as a result was placed in the MRL qualification division well below its ability. The division was won with a perfect 8-0-0 record and the was cemented with an emphatic 8-0 win against the runners-up Wizards FC on Saturday. The team twice beat MRL Premier II team FCX 6-1 and with those results the promotion to MRL Premier II for the Fall 2017 season should be secured. In State Cup 2001 Elite lost to eventual State Cup champion Eclipse.

2002 Elite head coached by Phil Nielsen finished 6th in the MRL Premier II division, but only 4 points away from promotion to Premier I. In State Cup 2002 Elite lost a heart-breaker 1-0 in the semi-final to eventual State Cup champion Chicago Fire Juniors South.

Over the next few months these teams will turn to the National League (1998 Elite) and Elite College Showcase circuit before turning their attention to the H.S. soccer season February 27, 2017. 1998 Elite, 1999 Elite, and 2000 Elite will travel to Raleigh & Wilson, North Carolina November 30th-December 4th and then to the Disney Showcase December 29th-January 3rd. The 2001 Elite and 2002 Elite will join the older teams at the Disney Showcase and then travel to the Presidents’ Day Showcase in Phoenix, AZ February 16-20th.