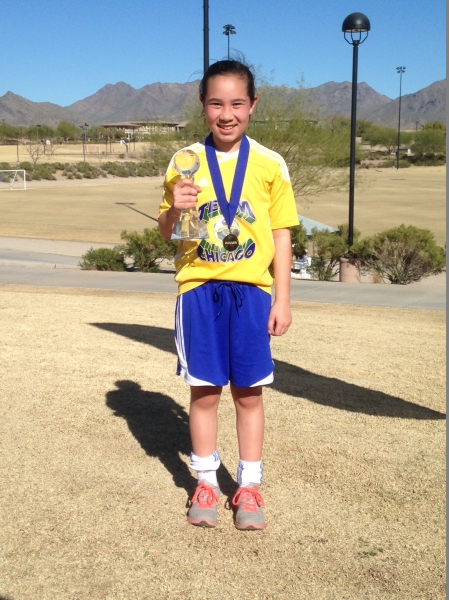 Below is an article from the Chicago Tribune about Team Chicago Academy-Cruzeiro midfielder Erin Sweda’s upcoming trip to Barcelona to train at the FC Barcelona Escola.

Teen gets to train with Barcelona soccer team!

When 13-year-old Naperville resident Erin Sweda heard that coaches from FC Barcelona, the Spanish soccer team that’s considered one of the world’s best, would be in the Chicago area for a clinic last summer, she was thrilled to participate. But thanks to her performance, she’s now one of only three girls in the United States who have been invited to Spain to train with the team’s coaches and participate in the FC Barcelona Escola tournament the week before Easter.

“It’s quite an honor,” said Ken Sweda, Erin’s father and a local soccer coach. “We’re unbelievably proud of her that she not only made it through a week of that kind of intensive training but that she stood out enough to be chosen.”

For Erin, an eighth grader at Crone Middle School, the chance to see FC Barcelona in person is still hard to believe.

“They’re definitely my favorite team,” she said. “I know all the players. We may get to meet some of them when we’re there, but just being there and practicing with the coaches is going to be great.”

Erin actually came to the game a bit later than most in the youth soccer-crazed western suburbs.

“I’m a big soccer fan, but I had never intended for her to be a soccer player per se,” Sweda said. “She was 5 or 6 when we took her to a soccer clinic from a local club. Frankly, she didn’t take to it too much. So we said, well, we gave it a shot.”

A few years later, after watching a lot of games on TV with dad and kicking the ball around in the back yard, Erin decided to try it again.

“She as about 8 then, and this time she really enjoyed it,” Sweda said. “And she’s progressed fantastically since then.”

“I think it’s just fun being out there (on the field),” Erin said. “I get to be surrounded by my friends and have a good time.”

She now plays a U14 club team with Team Chicago, and she’s looking at the FC Barcelona trip as a way to improve her overall game.

“I’m hoping to get the most out of it and put the most into it, effort-wise,” she said. “I like the way that (FC Barcelona) plays, and I want to be like that.”

“It’s really one of the best teaching academies in the world,” Sweda said. “This is pure soccer training. It’s really getting into the details of the game and how they play it. That’s where the enjoyment and fun come out of it, where you can see yourself getting better.”

Erin’s also looking forward to trying out her middle school Spanish while traveling — even if she’s worried about understanding the Catalonia dialect they use in Barcelona. And as a hopeful future architect, she’s interested in touring the city’s landmarks.

“I’m excited about getting to see everything in person,” she said.

While Sweda has been a lifelong soccer fan, his daughter’s success has caused him to get more involved and develop a coaching career.

“It’s really become a passion of mine as well, and I’m glad that we’re able to do it together,” he said. “It’s amazing that she’s going to be able to experience something like this at her age.”