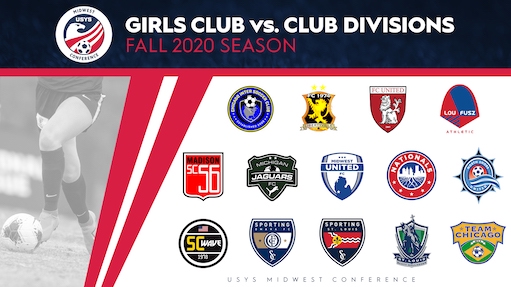 Team Chicago is pleased to announce we have been chosen to be one of the clubs taking part in the US Youth Soccer National League Midwest Conference Girls Club-vs-Club Division which will begin play in the fall 2020. One of only four Illinois clubs, and the only club in the Western Chicagoland Suburbs, our teams from U15-U19 will compete against other top clubs in the Midwest Region. Team Chicago Technical Director Dave Lovercheck feels the level of competition will greatly benefit Team Chicago’s players, stating:

“The newly formed MWC Girls Club-v-Club division ensures our top teams will compete against the top teams and clubs in the Midwest providing quality competition, high visibility in college recruiting as well as the continuing opportunity to qualify directly to US Youth Soccer Region II Regionals through league play. This is a positive step for the Region and for Team Chicago and we are very pleased to be taking part.”

“The conference’s selection committee believes the quality is high enough to expand this program from the initial intent of eight clubs to 14 well-qualified clubs,” said Marc Frankland, League Manager for the Midwest Conference. “The added clubs will increase playing opportunities while helping to reduce travel, which is important in the current climate. We received very positive initial feedback during our shortened inaugural Club vs. Club Division competition earlier this spring, and we’re looking forward to providing a great playing format for more clubs this fall.”

Teams in each bracket of the Club vs. Club Divisions will play within their own groups (no crossover matches) to determine the final standings. To determine who advances to the annual USYS Midwest Regional Championships, a playoff will take place at the end of the season. The highest placed teams from each bracket — that have not already qualified for Regionals by winning their State Cup — will meet to determine the age group’s Club vs. Club Division representative at Regionals.

The Midwest Regional Championship qualifier from the Club vs. Club Divisions will join the conference’s team-based Premier I Division qualifiers at Regionals. Each of the National League’s 13 Conferences, including the Midwest Conference, provide a pathway for their top teams to advance to their respective Regional Championships. Conference teams also have access to the new National League Showcase Series, which provides teams with a chance to play cross-conference matches in a national setting with increased exposure to college, professional and national team scouts.