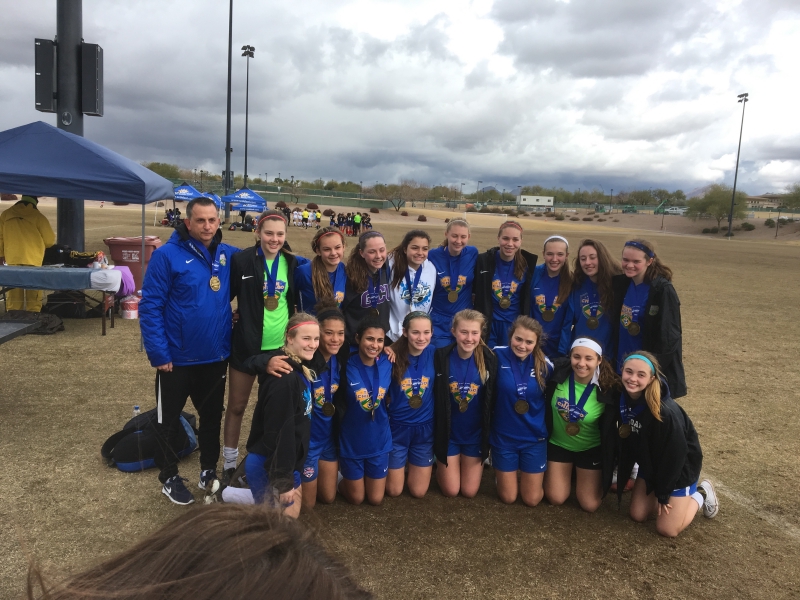 Team Chicago Academy 2003 Elite traveled to Phoenix, Arizona to participate in the prestigious SC Del Sol President’s Day (PDT ) event. The girls were able to compete against teams from Arizona, Colorado, Minnesota and Utah. Through group play the 2003’s outscored the competition netting 5 goals and only allowing 1 goal, earning a birth into the finals today. Friday night’s game was highlighted with a fantastic goal that started with Brooke M. winning the ball in midfield and driving to the middle of the park to then play a perfectly weighted ball into Allie K. path. Allie calmly sealed off the defender and went in to place the ball past the keeper into the bottom corner. The last few minutes of the game was challenging and ended with Lily C. having to make a save that carried the ball in toward the goal to have Emma I. clear the ball off the line. Game ended with a 1-0 victory and was a tune up for the balance of the weekend. There were several highlights by several individuals throughout the tournament but what stood out was great commitment by the entire team and determination to work for each other to achieve something greater.

The final was a well fought battle where the 2003 Elite had most of possession and gave up a goal against the run of play. The 2003 Elite never quit though, and Brenna Y. won a foul outside the box that Allie K. converted on a perfectly placed free kick to tie up the match at 1-1. With about 3 minutes left in the game Brooke N. made a spirited run down the right side driving to the end line to serve a fantastic ball across the box to Arohi M. who buried her shot for the game winner. “What a great way to end the year and I am so proud of their accomplishment”. said Coach Chura.