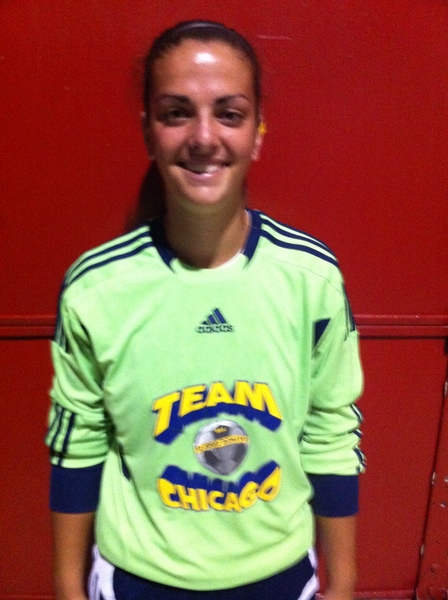 For the second year in a row Team Chicago Academy-Botafogo has clinched the MRL Premier Division title and earned a berth to the 2013 USYS Regionals in Des Moines, IA with an impressive 4-0 win at North Shore United.

Having seen Lou Fusz Wipke lose in the earlier game, Botafogo knew that a win against Regional-Finalist North Shore United would be enough to clinch the title, and the girls established an immediate control of the game which they never relinquished. Playing on a tiny field, it took a while to unlock the North Shore defense, but after Gianna Dal Pozzo got what would prove to be the game-winner with 15 minutes left in the 1st half, the outcome was never in doubt.

Early in the 2nd half Ashley Handwork and Zoey Goralski linked up and Zoey’s perfect, driven cross was emphatically slammed home by Ashley at the near post. A few minutes later it was Zoey Goralski who received a pass from Gianna Dal Pozzo in the middle of the field, and then drove forward before striking a perfectly placed low, driven shot into the goal.

As the icing on the cake, Gianna Dal Pozzo got her 2nd on the day after she made a perfectly timed run out of midfield to latch onto Hope D’Addario’s fantastic ball over the top and lob it over the on-rushing keeper.

Megan Geldernick earned the shutout in goal. This was her 7th shutout in 8 MRL games this season.