Botafogo Off to Perfect Start in National League Play! 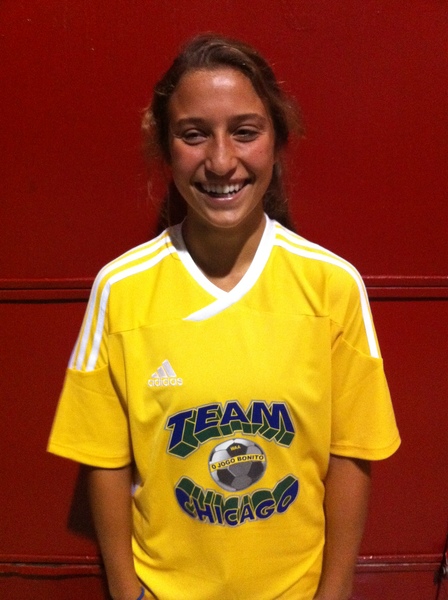 Team Chicago Academy-Botafogo ran out to a perfect 4-0 start in USYSA National League play this past week in Wilson, NC. Led by tri-captain Hope D’Addario’s 2 goals and 4 assists from her right back position, Botafogo scored 15 goals while only conceding 1.

Botafogo opened play on Thursday against North Shore United from Wisconsin and just like in this summer’s USYSA Region II Final Botafogo won 3-0. Meegan Johnston opened the scoring in the 6th minute from Hope D’Addario’s cross. Hope then converted a PK in the 50th minuted before serving a perfect corner-kick for Gianna Dal Pozzo to emphatically head home in the 58th minute. Megan Geldernick and Kiley Dunning shared the shutout in goal.

On Friday Botafogo took on Empire Revolution Academy from Western New York and Bryce Banuelos quickly put the game out of reach with two great goals. In the 4th minute Jenna Romano and Rachele Armand provide the assists after a perfect training ground run out of the back, and in the 20th minute Hope D’Addario and Zoey Goralski provided the perfect link-up play.

Zoe Swift then took over with two spectacular goals in the 36th and 55th minutes, on either side of the lone goal Botafogo conceded all week, assisted by Kaitlin Johnson and Gianna Dal Pozzo. Darby Moran then closed out the scoring at 5-1 in the 80th minute from a perfect Molly Piech set-up.

The toughest test of the week came on Saturday against Albion White from California South, but after a nervy first 15 minutes Botafogo slowly established dominance and after Hope D’Addario’s Olympico goal in the 39th minute, which proved to be the game-winner, there was never any real doubt about the eventual outcome.

A very strong second half performance saw numerous near-misses for Botafogo, but it was a thing of beauty that finally put the game to rest in the 70th minute. Zoe Swift collected the ball at the edge of the penalty box, and after cheekily nutmegging the hapless defender she served in a perfect cross, which Kaitlin Johnson headed home with an incredibly powerful airborne header. Megan Geldernick recorded her second shutout of the week in goal.

For interviews with tri-captain Jenna Romano and Assistant Coach John Rizzo as well as game footage please check out this link http://www.youtube.com/watch?v=g8yrg-J-mbk&feature=share&list=PL202B6B5961CBA0B2 at the 0:18-0:42 mark and the 6:25-7:57 mark.

Botafogo saved the best for last, though, and put on an incredible display of patient possession soccer as well as incisive combination attacking in Sunday’s 7:30am match-up against Players SC from Nevada. By the 7th minute Zoey Goralski and Bryce Banuelos had already made it 2-0 assisted by Gianna Dal Pozzo (2), Ashley Handwork, and Zoey Goralski.

Ashley Handwork made it 3-0 in the 26th minute from Hope D’Addario and Dana Miller, and Gianna Dal Pozzo toe-poked the 4th goal home in the 41st minute after a great combination with Zoe Swift. Swift then finished the scoring in the 64th minute when she nutmegged the Players’ defender out of the air on her first touch from Ashley Handwork’s pass before calmly slotting it home at the foot of the far post.

Megan Geldernick and Kiley Dunning shared the shutout in goal and have now only allowed 4 goals trough 13 National League and MRL Premier Division games this Fall.

Next up for Botafogo will be the final 3 games of the National League season to be played in conjunction with the Disney Showcase in Orlando, FL December 31st-January 3rd. With two wins out its 3 games there Botafogo will earn a berth in next summer’s USYSA National Championships in Overland Park, KS.