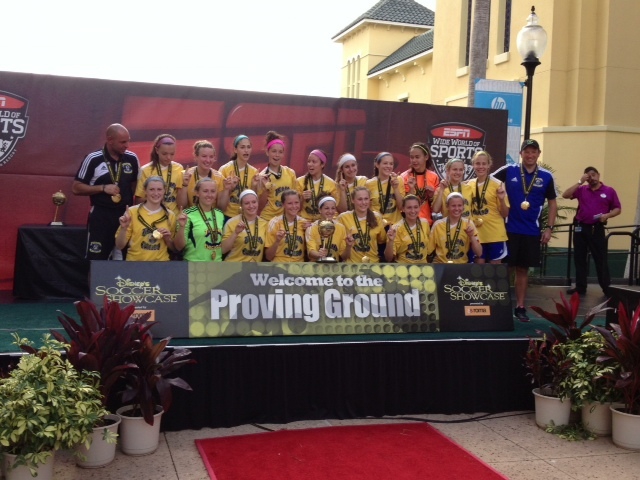 Team Chicago Academy-Santos and Botafogo both claimed Disney College Showcase titles today. For Santos it was the second year in a row they claimed the Disney title.

Santos faced ISA from New York in the U17 final which proved to be a very tight and physical contest. Heather Handwork got Santos on the board first after a great, mazy run midway through the first half. Madi Harris and Katie Ciesiulka assisted on the goal. Unfortunataly, ISA was able to strike back just before the half.

Santos took control from the start of the 2nd half and created a number of good chances, but unfortunately hitting the crossbar was as close as they came. The game went into 2 5-minute overtime periods, but Santos only needed 90 seconds for Kristen Brots to record the game-winner from 30 yards out after Hannah Rodgers’ pass.

The win capped a great week for Santos with very convincing performances against top-level teams from New Jersey, Georgia, Texas, and New York.

Team Chicago Academy-Botafogo also claimed the Disney title with a convincing 6-2 win over Javanon from Kentucky. The game was televised on ESPN3 and can be found at this link http://espn.go.com/watchespn/player/_/id/744360/size/condensed/

Botafogo conceded an early goal, but responded with 2 goals in the next 3 minutes to take a 2-1 lead into the break. The first goal was by Zoe Swift from Meegan Johnston and Gianna Dal Pozzo’s assists, and the second goal was a perfect Jenna Romano header off Hope D’Addario’s corner.

Botafogo quickly ran away with the game in the 2nd half as Zoe Swift scored twice in two minutes from perfect Zoey Goralski assists. Ashley Handwork made it 5-1 halfway through the 2nd half and Molly Piech got the final goal in the 89th minute from Meegan Johnston’s cross.

The win was Botafogo’s first Disney title after being runners-up the past two years.