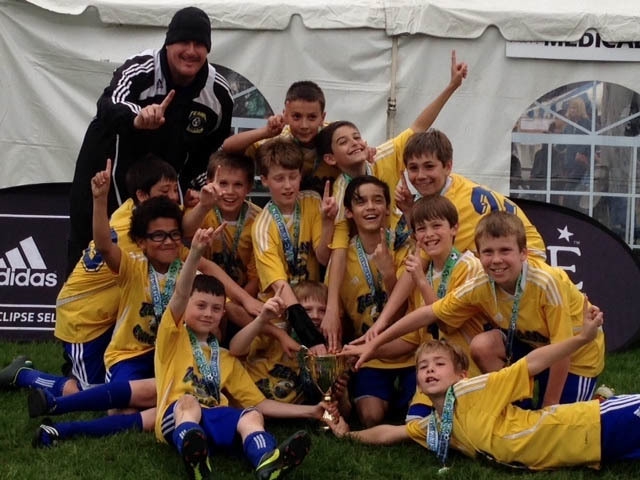 Congratulations to TC Rangers U11 boys for winning the championship of the Eclipse Spring Classic U11 Boys White Flight.

The weekend did not get off to the best of starts with the boys losing a Friday evening game by a 2-3 score to the NSA Falcons. After the game Coach Brian Bierman challenged the boys to play harder, better and faster.

On Saturday morning TC Rangers won against the Celtic SC Premier team 3-1. That set up a must win game for the late afternoon which the boys won by a convincing 5-1 score over Zen Extra Black.

After a bit of a wait on results from other games TC Rangers secured the wild card and a spot in the semi-finals on Sunday morning against Eclipse Premier East Black. TC Rangers rose to the challenge and won a tight 2-1 game to advance to the finals.

Sunday afternoon TC Rangers faced the NSA Falcons in a rematch of their Friday evening game. The NSA Falcons scored early in the first half and took a 1-0 lead into half time. Mid-way through the second half Ali Khorfan put in the equalizer off an assist from Nick McGrath. Just a few minutes later Ali Khorfan got into the box and was taken out by the keeper which earned a penalty kick. Ali put the PK into the back of the net and put TC Rangers up 2-1. The boys held on to the 2-1 lead to win the championship and avenge their only loss of the weekend.