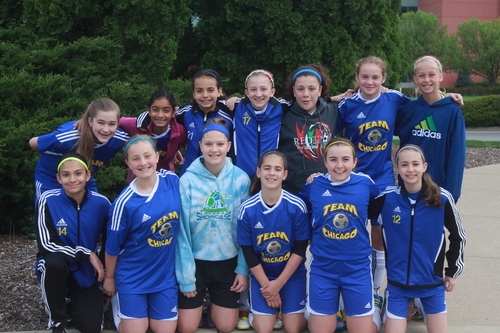 Team Chicago Academy-Panthers had a breakout tournament and secured their first silverware during the Red Lion Invitational in Indianapolis, IN last weekend.

The Panthers played four games in a round-robin group of five teams, placing second in a very competitive group. The Panthers lost a closely contested game by 1-0 to the eventual champions, Fishers SC, in the opening game of the tournament. Determined to win, the girls rallied to pick up two straight games against closely matched Indianaplois area teams, at 1-0 and 3-0, respectively.

Needing a tie or a win in the last game to place, the Panthers put together a fantastic team effort to return from being 2-0 down at half time against a strong FC pride team, to end in a 2-2 draw.

Through persistent pressure in the midfield, the Panthers dominated possession throughout the half, and ultimately drew a handball in the box to draw even with a well taken penalty.