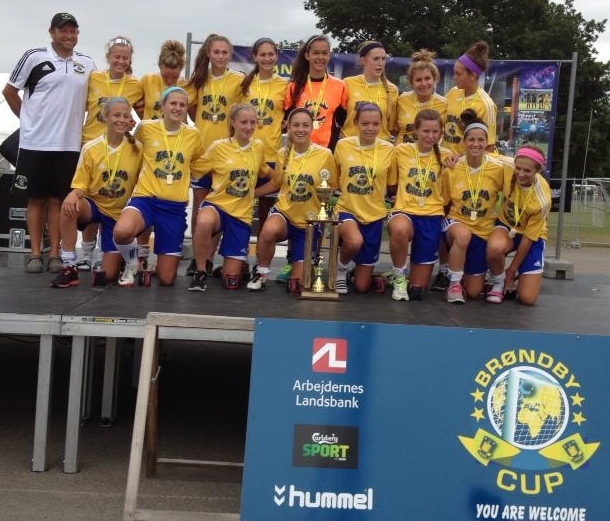 Americans are taking over Denmark!

Sam, Hannah, and Fuster here! We want to tell you a little about the memorable experiences we have had the past two days here in the homeland of the great Phil Nielsen.

We woke up to a beautiful Thursday morning in Denmark, sun shining, and a slight breeze. Grabbing a delicious hotel breakfast and laying low, Team Chicago Academy-Santos prepared for the exciting championship game waiting around the corner.

During warm-ups the clouds broke a little and tried to rain on Santos’ game, but nothing was to stop them from achieving what they traveled 10 hours for. The whistle blew and the championship game started, Team Chicago Academy-Santos vs. Hillerod. With possession back and forth the regulation time ended 1-1 (goal by Sara assisted by Abbey) and led to a penalty kick shoot-out to decide the winner. With hearts beating fast, Sam, Mary, Gianna, Rachael, and Heather were lined up to take their respective shots. However, with a great save by Fuster, and a lucky miss by an opponent, the game ended after only four shots. Screaming in excitement, the whole team ran onto the field for a team dog-pile.

Once our name was called and we lined up for some awesome pictures with the trophy, the whole team broke out in song singing “We Are The Champions”. Each player got their own medal and a small speakers, that actually works very well and have come to good use!

After all the pictures and the celebrating we went back to the dorm rooms to get ready to go out to dinner. We walked through the town to the pizza place which seemed like forever because we were all tired from the games. After eating dinner we went to the mall, which happens to be very different from our malls. There was a grocery store, weird sizing, and to our surprise everything was in English! Phil waited patiently as we looked about, and on our way home out of no where Judy came off a bus passing by (we were all surprised she didn’t get lost). Once back at the hotel we all laid low and just laughed and talked with one another in our rooms and at the clubhouse (a little restaurant on the hotel property).

Next day we woke up bright and early to get to our favorite meal, breakfast at the hotel!! We walked down, all on time this morning, to find ourselves competing for the delectable food with a team from South Africa. Once out of the crazy battle for food, we all rushed to our rooms to get ready for the day’s adventures.

Meeting back downstairs in the lobby Santos was off and began its big trek into the city of Copenhagen. With a walk to the bus, a bus to the train, and a train to the canal, we began our wonderful tour of Denmark! We ran into a few minor problems, including: many close calls almost losing Phil (Olympic speed walker), Hannah and Gabby almost getting run over by the stampede of walkers, and many Santos left behind. We soon realized that we weren’t in Kansas anymore. With all the hustle and bustle of the journey into town, we finally took a break and soaked in the beautiful European architecture on a canal tour of Copenhagen. It was really cool to see the mix of the old buildings full of charm and the new buildings full of glamor come together to make such a remarkable city of Denmark.

After getting off of the canal tour, Phil cut us lose and we set off like wild animals (in groups of four or more), some looking for souvenirs, some for clothing, and most for FOOD! Gabby and Hannah shopped till they dropped! Fuster and AJ got juice at a unique place called Joe and The Juice. While others experienced the rich culture in and out of shops and trying the unique cuisine of the country.

We left the city mid afternoon on a quest to see the U19 national team game, Denmark vs Canada. It took a train and a bus to get there but once there Santos quickly realized they were a few chaperones short. Mrs. Marconi and Mrs. Rounce had failed to see everyone get off at our stop and continued to ride the bus after we had gone. Meanwhile the game was an exciting scoreless match even into the second half where it ended regulation time tied 1-1 to be settled by a penalty kick shoot out. The Danish were a force to reckoned with finishing all there penalty kicks and their goalkeeper, like a fierce animal, stopping most of the shots Canada had to offer.

Quickly after the game Santos chased behind the fast and furious Phil to get back to the hotel in time for dinner at the clubhouse. We then went to our rooms and had a dance party using the speakers we got from the championship win. With a lovely dance performed by Mary, Heather, Kristen and Katie directed by Tracy and choreographed by Abbey.

Shortly afterwards we got exciting news of an Olympic sized scavenger hunt/game extravaganza hosted by the amazing chaperones. We started off by deciding teams from all around the world, including: Nigeria, Egypt, ’Merica, and JaBOOTY! We then continued with a game of photo scavenger hunt, dizzy soccer, charades, and pictionary. The funniest game and team favorite of the night was probably dizzy soccer, which included us spinning in a circle around the soccer ball five times, dribbling the ball in between parents and then having to try and make it in the goal past Phil, only to throw it back to your team waiting patiently to get ’er done. It was funny to see our teammates struggle to dribble in a straight line, even funnier was probably Abbey wiping out, but especially Madi missing the goal about seven times!

After the games the chaperones treated all the participants in the Olympic Games to a nice cold dessert in the clubhouse. The team exhausted from the days events returned to their rooms to get a good nights rest for the activities that were planned for the next day.

Overall as you can see, we are having a pretty fantastic time in Denmark. And though the tournament may be over, the Santos crew is always finding new ways to have fun and most frequently have Phil yell at us ;) we love it here and are glad to share some of our experiences with you!