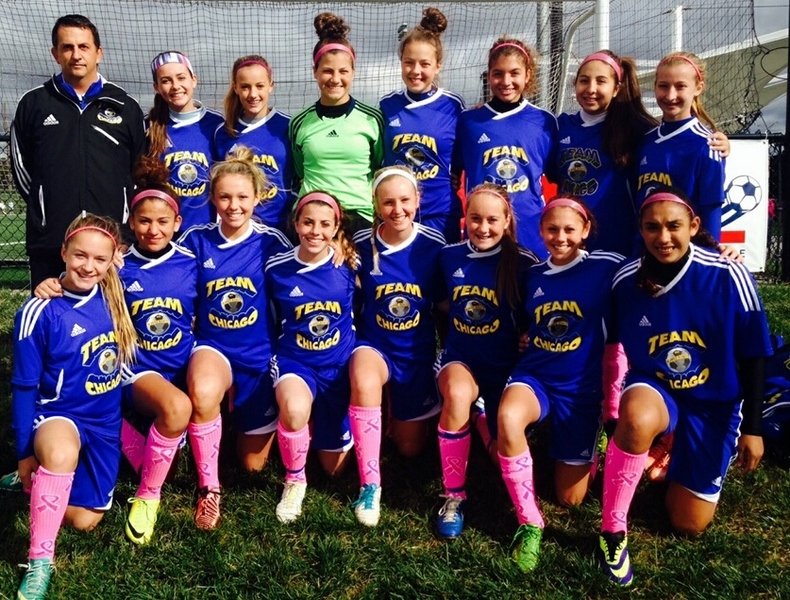 Team Chicago Academy-Brasilia traveled to Overland Park, Kansas this past weekend for U15 MRL Premier competition knowing that one win would be enough to retain its Premier Division I status for the 2014 U16 season.

The opening game was against Futura Forte Premier who were the 2013 Spring MRL Premier champions. Brasilia came away with a 1-2 loss, but deserved a better result. Early on Futura had more possession, but as the game developed Brasilia found more of the ball and started to create dangerous opportunities.

Safia Hannin had the best chance after a great run with ball that ended with her beating the keeper low to the near post only to have the ball deflect off the post across the goal. Being opportunistic, Maggie Roe was there to tuck the ball away but the goal was ruled offside. Brasilia continued to apply pressure and a poor clearance by Futura found its way to Jasmine Ruiz who did a nice job to collect the ball and beat the keeper far post to go up 1-0.

Futura responded with two goals in a span of about 10 minutes to go up 2-1. With less than a minute to play Madison Lockard’s punt bounced over the last defender for Futura which created a break away on goal for Rachel White and Julia Hosler, but again it was ruled offside. Overall this was a very competitive game with glimpses of good things to come.

Sunday morning’s game was against Toro Galaticos out of Omaha, Nebraska who are the reigning State Cup Champs. The first goal turned out to be the game-winner and started with Safia Hannin driving the ball in from the right side that was played by both Maggie Roe and Rachel White before finding Makenna Schoolman who buried her shot past the keeper. Brasilia went into the half up 1-0 and controlling more of the half.

The second half started right where Brasilia left off with Jasmine Ruiz playing a nice through-ball to Maggie Roe who beat the last defender and the GK before finishing the play to go up 2-0 ten minutes into the half. The third goal came off a corner that was sent into the box by Jasmine Ruiz. Abby Severson met the ball first and flicked the ball onto Emmerson Fuller who settled the ball and calmly finished the play to make the final score 3-0.

Brasilia continued to create some great opportunities and with great ball movement. The best shot of the match came from Maddie Lambert who was on the right side of the box about 25yards from goal. Maddie made a great first touch, eluded her defender and fired her shot that just missed the upper 90, but was a great example of the type of opportunities Brasilia created.

Brasilia will now face NSA and Libertyville 1974 in the next round of MRL Premier Division games.