Lightning Surges to Runner Up Finish at Midwest Cup! 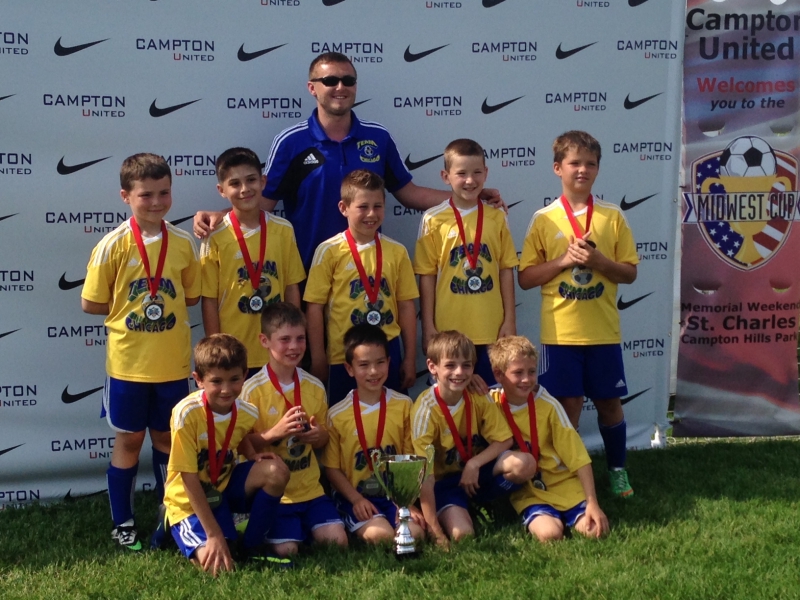 Team Chicago-Lightning tasted success at the Midwest Cup hosted by Campton United over the Memorial Day weekend. Playing in the U9 Premiership division, Lightning opened the tournament against Chicago Magic. Despite dominating possession the first half, the team found themselves behind 1-0 at the half. However, as would become a theme over the weekend, Lightning stormed back in the second half with 4 goals after a blast from Alex Das opened the floodgates, finishing with a 4-1 victory.

Game 2 was against the host Campton United. Again Lightning fell behind at the half, this time 2-0, and again they dominated the second half. This time they could only muster 2 goals, the second on a brilliant run by Sam Nichols, and finished with a 2-2 tie. Needing a victory in the third game to advance to the finals, Lightning faced off against a physical NSA Blackhawk team. This time Lightning opened the scoring when Ryan Mauder tapped in a rebound off a shot by Alex Stadnyk that caromed off the crossbar. Moments after NSA tied the score at 1, Stadnyk took care of things on his own with a perfectly placed shot in the upper corner. A second half goal off a corner kick by Luke Macaluso completed the scoring and sealed a 3-1 victory.

The final match-up was against an undefeated Addison United squad that had not surrendered any goals in the tournament. Play was even in the first half, but the bounces went Addison’s way as they netted 2 goals off loose balls in the box, while Lightning only found the crossbar again on a shot by Nik Juarez. Lightning owned the second half once more, dominating possession, and finding the back of the net midway through the period when Ryan Mauder burst through the defense and cut the lead to 2-1. Despite constant pressure and a number of close calls, the tying goal did not come and with only minutes left and Lightning pressing everyone forward, Addison countered on a breakaway to complete a 3-1 victory.

The Lightning team returns to regular season games this weekend and hope to remain perfect in NISL play.