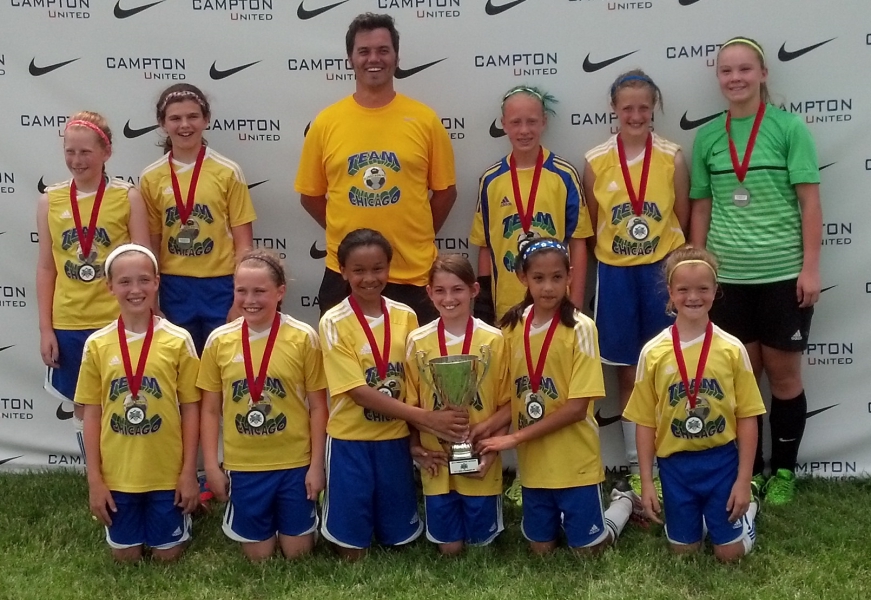 Coach Ben Tatham’s Team Chicago-Vitoria played in the top division at the Campton United Midwest Cup this past weekend. The bracket the girls played in was filled with top teams and a great finish would have been to win one of the three games:

Trevian – a U11 team currently undefeated in IWSL U12AB and the top U11 team in the area. The girls battled hard and earned a 0-0 tie. This was a significant result given the dominance Trevians has had over all area teams.

Alliance Michigan – currently ranked in top 5 in Michigan and a dominant tournament team. Another tough battle but the girls rose to the occasion and earned a 1-0 victory.

Rockford Raptors – beat Vitoria twice in the Puma Cup including 2-0 in the championship. Vitoria scored early and held on for 1-0 victory and got some revenge in the process.

Vitoria had to wait around Sunday to see how Trevian and Alliance finished as it was possible that the determination for who represented the bracket could come down to PKs. Alliance MI scored late to tie the game and Vitoria advanced over Trevian.

The Championship was against Kickers United and again a great match ended in a 0-0 tie that then went through 2 OTs and finally to PKs. Vitoria fell short in PKs, but while disappointed, the girls have much to celebrate. Getting through one of the toughest brackets and into the Championship is huge, but doing it with one sub the whole tournament versus teams that could send in four or more subs at a time is to be noted. Also, Vitoria did not let one goal in for the whole tournament.