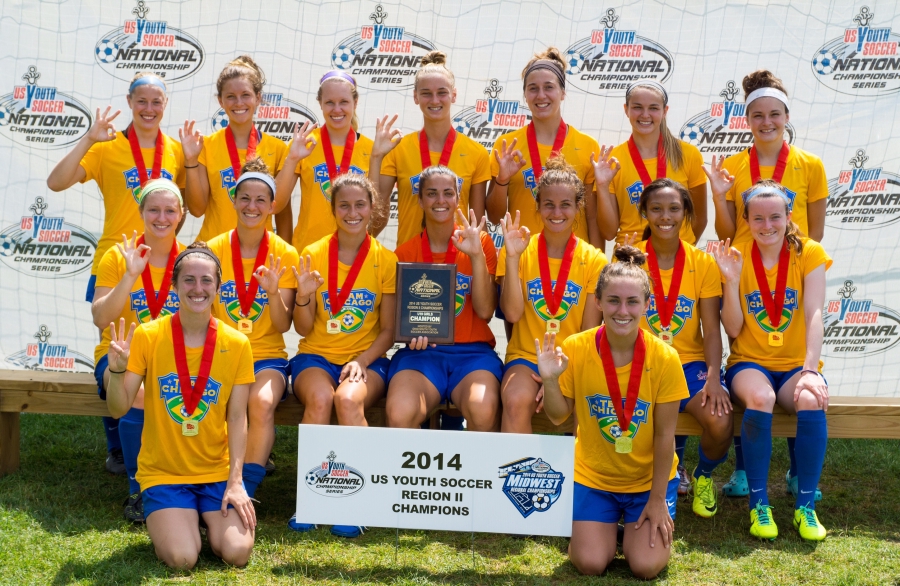 Team Chicago Academy-Botafogo completed a three-peat as USYSA Region II Champions with a 2-0 win over OP Eclipse in the final. Zoe Swift got the eventual game-winner from Gianna Dal Pozzo’s pass, and Liz Bartels got the insurance goal from Zoe Swift and Rose Lavelle. Megan Geldernick earned her 3rd shutout of Regionals in goal.

On its way to the final, Botafogo defeated Appleton Goalgetters 7-0, Javanon 5-1, Iowa Alliance 3-1, and Carmel United 4-0 in the semi-final. Ashley Handwork won the Golden Boot at the event with 6 goals.

Botafogo will now head to Nationals in Germantown, MD July 21st-26th to defend its national title from 2013.

Team Chicago Academy-Cruzeiro finished tied for 2nd in the U14 “Group of Death” at Regionals. Campton United was able to avenge its 3-1 loss to Cruzeiro from the State Cup semi-final to win the group and advance to the semi-final. Cruzeiro finished out an amazing 2013-14 campaign with a 23-2-5 record in competitive matches, an MRL Premier I Division Championship after going 7-0-0, a IYSA State Cup title, and qualification for the 2014-15 USYSA National League.

Congrats to both teams!