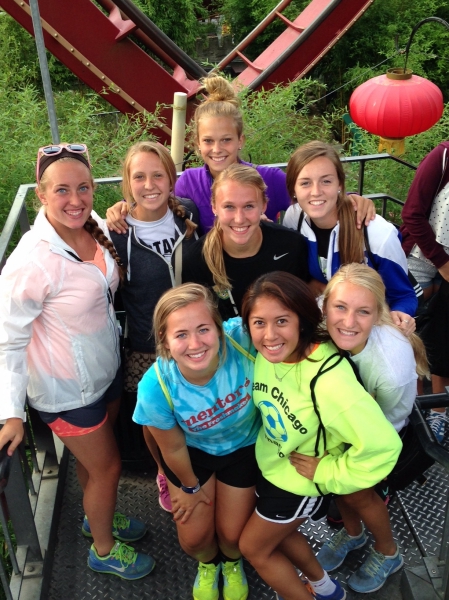 Our 4th match in 28 hours proved the body’s limitations. Having only a 5 minute warmup and full stomachs, we began slow in the game against Viborg and gave up two goals right away, and a third later that half. Second half we were able to create more chances and got a goal for a final score of 1-3. This had been the best team we had played so far and they were considered the best U17 team in Denmark. The *highlight of this game: Maddie getting thrown into the trees by an angry Danish girl on the other team.

After the scrimmage, we headed back to the hotel to clean up before our next adventure. We met back in the lobby and Shelby was dubbed tour guide. She led the group through the winding streets of Brøndby as Phil shuttled groups in his station wagon. Being a passenger in Phil’s car taught us that speed limits are merely suggestions and that breaking during turns is unnecessary. I can’t imagine what it must’ve looked like to a passerby when Phil whipped his car up the curb and a group of teenage girls piled in.

The grocery store was as expected; we walked around aimlessly until we found something with chocolate in it or fruit. Tori embraced her childhood and made a special purchase of a Cars water bottle. We loaded Phil’s car with all our groceries and started walking to the pizza place. It wasn’t exactly the Chicago style pizza we were used to but we devoured all 9 pizzas nonetheless.

Back at the hotel, we overtook the balcony by our rooms and sat around talking and laughing until the sun went down.

Exhausted from the previous day’s matches, Phil granted us 30 minutes extra sleep before we began our day. Breakfast was served and then we had a two hour rest period before we left for the beach.

Phil’s ‘one mile’ walk to the beach took us 50 minutes and felt more like a half marathon. Phil held a strong lead; his morning power walks are paying off as he left us in the dust. At the beach, Phil promptly found a spot and went right to sleep as the rest of us put our towels down and began exploring. The ‘ocean breeze’ smelled more like a rotten egg than a Yankee candle, but we still enjoyed the hot sand. We quickly realized we’re not in America anymore when the clothing on the beach became optional. The real spirit of tourism kicked in when Kiley and Maddie had their own beach photo shoot. Even though the sun came and went with the clouds, we had a successful day at the beach. Phil power walked back the hotel to get his car (probably because we were too slow for him) to shuttle us back to the hotel.

Back at the hotel, we devoured 9 more pizzas and headed out for our scrimmage of the day. It was a close match against Brondby’s U17s and all three 25 minute periods were back and forth with no goals in either end. Quincy is convinced her shot went in, but the ref’s discretion said otherwise. This landed the final score of 0-0.

We ate dinner and went back to our rooms exhausted from another full day.

Brought to you by Room 513 (Mallory, Hannah, Quincy)