U9 Boys Successful in Wisconsin! 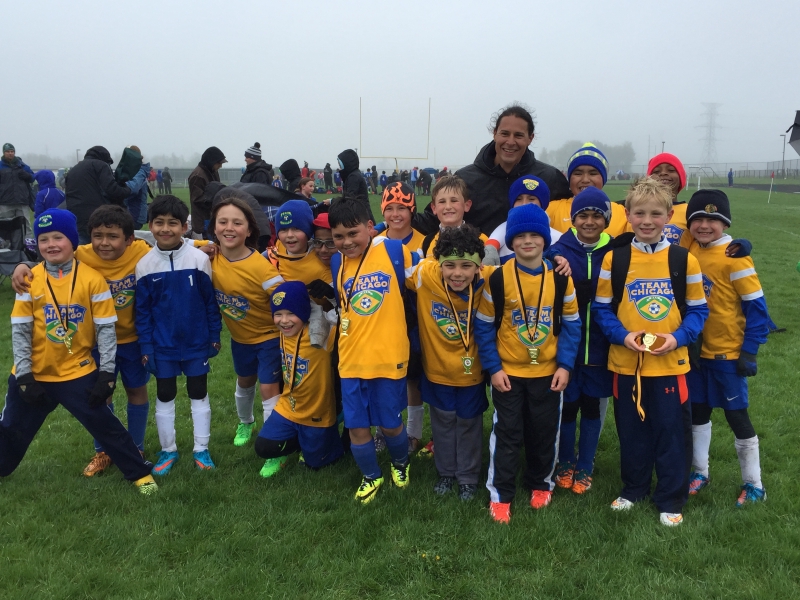 This past weekend, both Team Chicago Boys U9 teams – Fluminense and Brasil Boys – traveled to Racine, WI to compete in the Ace Midwest Spring Soccerfest. Like Buffalo Grove and Glen Ellyn in the fall, TC left its mark on another area as the boys battled through adverse weather conditions, physically challenging opponents, and consistently inconsistent officiating.

Brasil Boys, who were punching a bit above their weight, finished with a 1-2-1 record to settle right in the middle of its group. The most impressive games were both on Saturday as the boys battled back multiple times from being down goals to beat KUBA Elite by one and tie the hosts Ace South Arsenal, both in the dying minutes. The now nicknamed Cardiac Kids earned this title through fitness, a stubborn commitment to employ their 1v1 skills, and support from both teams’ players and parents.

Fluminense’s road was more evenly matched, and the players also persisted to show off their skills and teamwork en route to dispatching every opponent to finish a perfect 4-0. The most impressive game came in closing the tournament when facing a strong and very emotional KUBA Elite team. It took more than a half for the boys to gain control of the game, but once they did, KUBA made it clear they were not used to compete against the individual skill Fluminense possesses. So with the sidelines heated and the game still in flux, frustrations boiled onto the adjacent field enough to distract spectators from their priorities as they watched the boys patiently play through KUBA’s blatent attempts to knock them off their game. On two separate card-able occasions, the boys proved that the best way to retaliate is on the scoreboard by finishing their own free-kicks, celebrating, and finishing off the game and tournament in style.

By the end of the weekend some stats were impressive such as both teams’ versatility: A combined 13 different goal scorers and 10 different goalies. However, the lessons learned, not only by players, but possibly even more so by parents – like play to the whistle or the hustle rule – will be used both on and off the field. Another huge positive was the club feel of having both teams’ players and families at the pool and cheering from the sidelines in support.This made the tournament’s challenges like weather or refereeing an even sweeter success. Thank you to all the families that made this possible, and may the boys carry these lessons far past this weekend. Go TC!