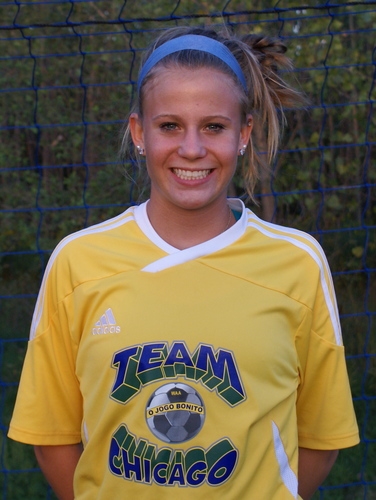 Team Chicago Academy-Santos emerged victorious from its top-of-the-table clash with previously unbeaten North Shore United to all but secure promotion to the 2013 MRL Premier Division. Santos will just need a tie in either of its last two games to take the U17 Girls First Division title.

North Shore United was 5-0-1 heading into Sundays match at Gentile Field, but they were no match for an inspired Santos squad. In front of a great crowd, Santos put in a dominating performance in an impressive 3-0 win to move to a perfect 5-0 record.

Co-captain Kristen Brots got the eventual game-winner 20 minutes into the contest after great link-up play by AJ Jakuszewski, co-captain Kaela Leskovar, and Olivia Schmitt down the right flank. A few minutes later Olivia Schmitt put the game out of reach with a perfect finish from Mary Rounce’s through-ball.

10 minutes into the 2nd half Heather Handwork sealed the victory when she ran onto Kristen Brots’ perfect diagonal through-ball and calmly slotted it far post.

Courtney Keefer and Abbey Fuster shared the shutout in goal behind a great performance by the entire defense.

Santos will now play its last two remaining MRL games on Gentile Field at PlayUSA this Saturday and Sunday at 3pm against FC Milwaukee and Croatian Eagles. Please, come out on Saturday to cheer Santos onto victory and promotion to the MRL Premier Division.

Continuing its impressive run in the U18 Girls MRL Premier Division, Team Chicago Academy-Botafogo beat Lou Fusz-Wipke 3-1 in the final game to go 8-0-1 with 35 goals for and 3 against. Bryce Banuelos got the first goal from Ashley Handwork and Jorie Clawson in the 1st half and Gianna Dal Pozzo and Meegan Johnston (from Zoe Swift and Zoey Goralski) sealed the victory in the 2nd half.