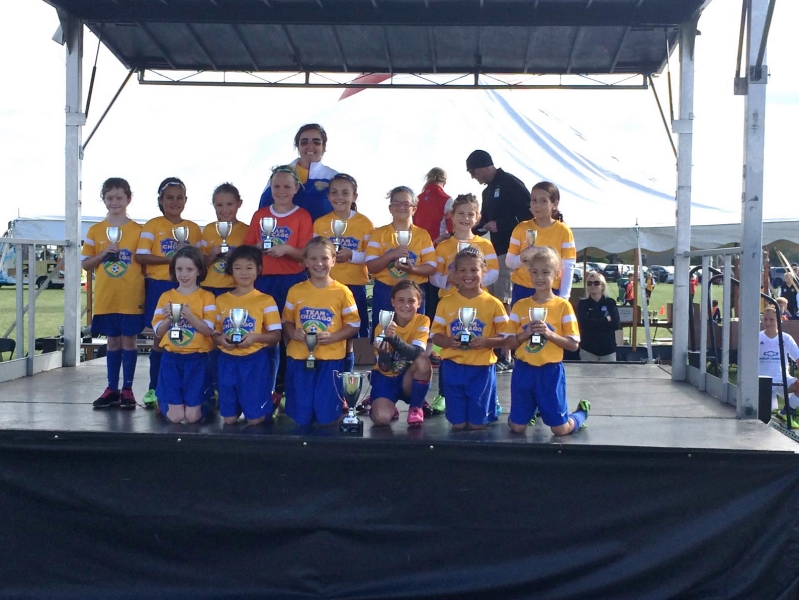 A few weeks ago, Team Amarelinha played in their first tournament. The U9 girls faced a tough challenge since they entered to play at the U10 level. The tournament began on Friday afternoon with Amarelinha playing Galaxy SC Black. It was a hard fought game and we came out on top with a 2 to 1 victory. The girls were all smiles at the end of the game and were so excited for the win. Everyone played great, a very good team effort to bring home the win.
The team then played East Moline Silvis on Saturday. The U10 girls on the East Moline Silvis team were at least a head taller than our girls, but that did not faze our girls. They again played a very strong game and scored a shut out win. The girls played together as a team, demonstrated great foot skills, good passing, and solid defense.
Both Galaxy SC Black and East Moline Silvis were part of our bracket, so going into Sunday’s games Team Amarelinha was in first place and guaranteed a spot in the finals. On Sunday morning, the team played Galaxy SC Yellow, the #1 team from the other U10 bracket, They were, also, 2 and 0 entering the game. Galaxy SC Yellow was a very tough team, but girls never gave up. Unfortunately, we lost 13-0.
Since Team Amarelinha won their bracket and Galaxy SC Yellow won their bracket, the two teams met again for the championship game on Sunday afternoon. Team Amarelinha came back strong after the loss from that morning and scored a great goal. Even though the final score was 1 to 7, the girls’ played a tremendous game and should be very proud of their effort. Despite giving up a significant size difference to everyone they played, they demonstrated a lot of heart and earned their 2nd place trophy. Congrats to Team Amarelinha for a Second Place Win in the Great Lakes Soccer Challenge in Naperville. What a great first tournament for the Team Chicago U9 Girls Amarelinha Team!!!